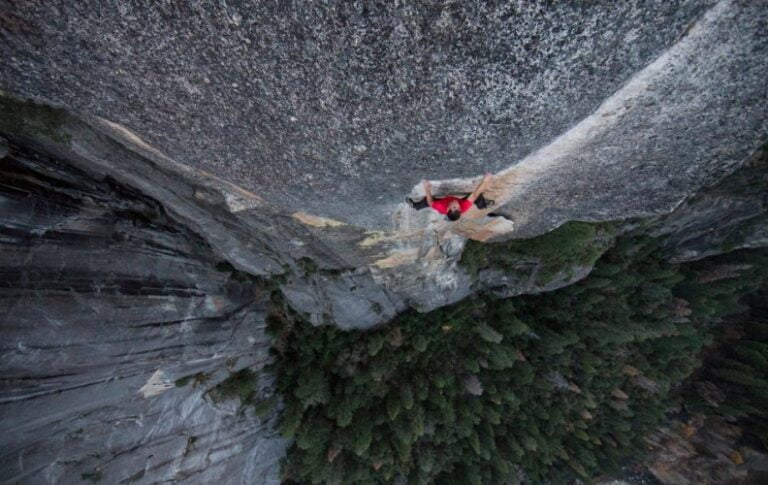 Like everyone, I couldn’t help but wonder what possessed an otherwise mild-mannered, calm man to take such insane risks. But halfway through the movie, we finally get a clear window into what makes Honnold tick. An MRI scan of Honnold’s brain shows no activation in his amygdala, the fear center. Honnold is, apparently, virtually incapable of feeling the sort of fear that would make us stop a risky activity like free soloing El Capitan. Yet Honnold has no death wish. He believably states that he’d much rather avoid dying. It’s just that the only times he feels alive enough to be worthy of the term is when he’s taking life-threatening risks.

Fiction works the same way. The best screenwriters in Hollywood also seem to understand that people have an innate sense of how much risk they’re willing to take. Classic caper movies, such as Ocean’s Eleven and The Italian Job, start with the lead character having just been released from prison. Free from their incredibly boring prison existences, Danny Ocean and Charlie Croker, respectively, immediately set about plotting their next heist. Far from setting them on the straight and narrow, their prison experiences push them strongly back in the direction of action, of getting closer to their risk-tolerance set points. The reason you believe in these characters and that you empathize with them (aside from their matinee good looks) is that you instinctively understand that the high-risk lifestyle is fundamental to who they are.

A taste for risk

The thing is, this taste for risk (or an aversion to it) isn’t just about climbing or caper movies. It turns out we all have a well-defined amount of risk that we’re comfortable taking. In a study by John Grable and Abed Rabbani of the University of Georgia, the authors examine the question of whether risk tolerance is a broad-based disposition or whether it’s domain specific. Using a dataset from the National Longitudinal Survey of Youth in 2010, they discovered that people’s risk-tolerance actually is robust across domains. A single “risk-tolerance” factor explains the majority of variation for a variety of behaviors, from everyday risky situations such as smoking to financial and occupational decision-making. That’s your risk set-point.

Why does this matter to you the investor? It’s because of what happens when your life doesn’t provide you with either enough or too much risk. And the fact is that a lot of retail investors get sucked into trading more (and more often) than they should because of this set-point.

How often do you log into your online brokerage account to check your portfolio? More often than you’d like? That’s your risk set-point, begging for a little more variance in your life. Drawn to the big swings of trading options or volatility products? Again, it’s that set-point looking for some action.

Maybe you’re the opposite. You know you should be invested in equities and not bonds because you read something about the equity risk premium. But you can’t bear to look at what the S&P500 did today because you know what it means to your portfolio if it went the wrong way. That angst is because you’re taking more risk than your brain’s set-point is comfortable with.

Of course, the financial intermediaries you deal with know all about this. The financial services industry, at least at the retail level, clearly markets itself to affluent people with exactly the sort of language that will appeal to people motivated either to seek or to avoid financial risks:

In both cases, they’re not really appealing to your rational self. The appeal is to the mismatch between the amount of risk you believe you’re taking and the amount you’re comfortable with.

The first step in making better investment decisions is best summarized by the immortal quote from Bruce Lee:

Before going out there into the wide world of financial markets, you’d better have a very good handle on what’s going on inside your own head. Without that crucial first step, you’ll end up falling for emotional appeals to your risk set-point by those who’d seek to profit from it. Once you get your own self-image in order, you match up your investments to your tolerance and you’re better able to make rational decisions about them.

Pre-commitment is a superpower

One of the most powerful protections against someone leveraging your set-points against you is pre-commitment. If you explicitly record your beliefs and preferences before an event occurs (in this case, a trade), you have made it more difficult to go back and change your mind. This record doesn’t have to be particularly strong in order for it to help protect you against hindsight bias. A simple note jotted down on a piece of paper, a statement to a colleague about your thought process, all of these serve in your brain as markers of beliefs at the time.

Again, one of the best ways to avoid fooling yourself about your previous beliefs and motivations is to set them down in writing at that time. After all, it’s hard to argue with a piece of paper. The most powerful way to leverage pre-commitment is to make it structural. Structural pre-commitment is culture. It’s a habit of writing things down, of making conditional plans and decision trees to describe your future actions. It’s pre-commitment that’s so ingrained it becomes the default action. This habit can be personal, but it can also be encoded in the culture of an organization. This is what lets you analyze your thought processes in a less-biased manner, and to improve them over time.

Having a set of people with whom you can talk about your investing ideas, creating a systematic process for evaluating them, making plans, and evaluating those plans, all of these are ideas that are fundamentally social and cultural. If you’re successful in creating such a culture, the desirable habits become automatic.

Your risk set-point is only one of the many ways that your motivations can lead you down some sub-optimal paths. In my upcoming book The Laws Of Trading, the first chapter is entirely dedicated to examining all the ways that motivation can lead us astray. Boredom, intellectual validation, the mythical “zone”, all of these can be exploited by others to our detriment. And the power of pre-commitment is only one of many other techniques that help you mitigate the effects of these undesirable motivations.

Agustin Lebron began his career as a trader and researcher at Jane Street Capital, one of the largest market-making firms in the world. Over the years he traded many kinds of securities: equities, futures, commodities, options, and an assortment of other derivatives, and has created, developed and implemented several successful trading strategies.

He currently runs the consulting firm Essilen Research, where he is dedicated to helping clients integrate modern decision-making approaches in their business.