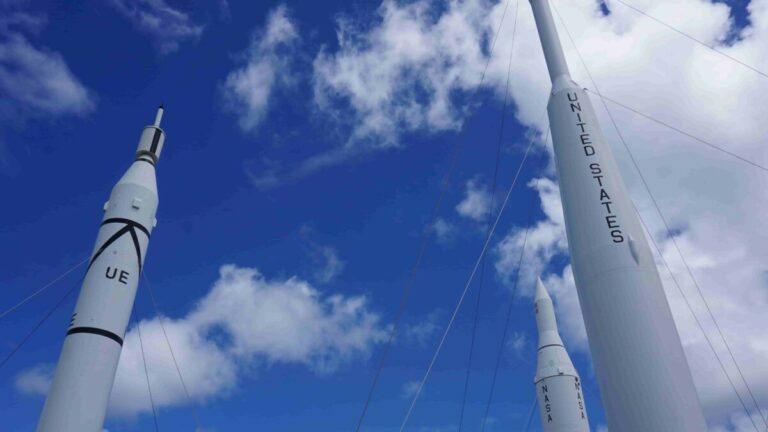 The final frontier seems to be getting closer and closer for humans. There is a slew of companies that have been continuously making progress to break down the barriers to space entry. But will space still be a priority in a volatile 2022, especially considering that we are not able to handle things between neighbors on earth? We think so. Here’s a look at three of the best space stocks to watch in 2022 and beyond.

Lockheed Martin (LMT) is another America-based aerospace, arms, defense, information security, and technology corporation operating worldwide. It was formed as a result of a merger between Lockheed Corporation and Martin Marietta back in the March of 1995. Its stock might have lost a little value in the past week but it can’t be denied that Lockheed Martin is all poised to become one of the biggest Rocket Companies in the world.

One of the best things that indicate the company’s glorious future is that it will have a big role in NASA’s Mars mission as it has already been awarded three separate contracts by NASA. According to the first contract, the company has to build the cruise stage of NASA’s Sample Retrieval Lander that would carry the MAV to Mars. Again, as per the second contract, the role of LMT would be to typically build Mars Ascent Vehicles (MAV) by as early as 2026 which NASA would use to bring samples from the Martian surface back to Earth. Finally, as per the third contract it has to build the MAV’s Earth Entry System, a space capsule that would hold samples on the final part of their voyage. LMT will be receiving at least $232 million for all these roles.

On top of that with the advent of the conflict between Russia and Ukraine, countries around the world have been escalating their defense budgets largely. This has provided LMT with a wide moat as now it will be having an increased opportunity to sell its products like the U.S. F-35 fighter jets to the countries that are willing to replace their aging defense resources. Moreover, the company has long-term US government support as well as customer commitment. Like the US government plans to acquire 3000 of its F-35 fighter jets and till date, has been delivered only about 700 of them

Virgin Galactic is a California-based spaceflight company that focuses on the development, manufacture, and operation of spaceships and related technologies for the purpose of conducting commercial human spaceflight and flying commercial research and development payloads into space. The stock has been on a roller coaster ride since the past year and is currently trading near its 52-weeks low after losing close to 80% of its value in the past one-year period and is down by more than 46% year-to-date.

The space tourism company has suffered a lot as people were sceptical about its long-term plans in general. The Russia Ukraine conflict too did not help this stock much either like it did to others in a similar segment. However, space tourism is a futuristic project and can bring immense prospects to Virgin Galactic. The company had decided to sell the tickets for a price of $450,000 including a $150,000 upfront initial deposit earlier this year and intends to take onboard 1,000 customers by the end of this year. Around 250 seats are now remaining out of the initial 1000 and the company expects the rest to be filled within some more days. Virgin Galactic’s fourth-quarter earnings have received mixed responses. The company reported a revenue of $141000 along with a loss of $0.31 per share. Though the loss amount was lower than expected the company was unable to crush the market’s revenue estimates by a substantial margin. Virgin Galactic is currently ramping up its vehicle enhancement program and its progress on the same has been good. But, its road towards profitability still involves a lot of risks and is quite competitive as well. The market is waiting for more signals before determining its true potential but is still pretty optimistic about this stock.

Howmet Aerospace is a Pennsylvania -based aerospace company that manufactures components for jet engines, fasteners and titanium structures for aerospace applications, and forged aluminum wheels for heavy trucks. Presently, the company operates through four segments: Engine Products, Fastening Systems, Engineered Structures, and Forged Wheels and has 27 facilities spread across the regions of the US, Canada, Mexico, France, the UK, Hungary, and Japan.

Howmet’s fourth-quarter 2021 results received mixed responses. The company generated total revenue of $1.3 billion for the fourth quarter indicating a mere 4% increase from the year-ago quarter. Its income from continuing operations, excluding special items, came in at $.30 per share, a solid 42.9% increase from the $0.21 generated a year ago. The increase in its revenue was driven by an improvement in the commercial aerospace and commercial transportation markets as well as the company’s correct pricing tactics. However, the weakness in two important segments namely the Fastening Systems segment and the Engineered Structures segment which account for more than 30% of its total revenues have been the reason behind this lagged revenue growth. Moreover, the lower interest expenses due to the reduction in debt helped the company in maintaining its margin levels.

Howmet shares are down by 1% in the last month and are up by 4% year-to-date. But the ongoing conflict between Ukraine and Russia and the US push to rebuild its crumbling infrastructure by spending trillions could see demand for its high-end metallurgical technology to shoot up. Therefore, if things go as intended for Howmet, its stock could soon see a lot of momentum in the near future.