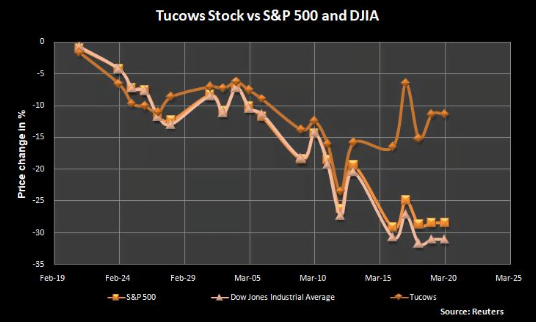 Since the outbreak of the novel Coronavirus, most of the investment avenues are witnessing a significant downtrend. Notable indices like the S&P 500 have fallen by approximately 29% and the Dow Jones Industrial Average is down by 32% from record highs.

One could suggest that it the best time for new investors to enter the equity market as there is a lack of profitable and benign investment alternatives with bond yields at record lows and falling gold and commodity prices.

Many countries worldwide have called for a national emergency and social distancing. This will impact consumer spending and demand significantly. We have already seen a slew of travel, airline, retail and restaurant stocks take a significant hit in the last month.

During these critical times, investments in stocks of internet related service providers and tech companies could make a difference to your portfolio. Tucows Limited (TCX) is one small cap stock you can consider for your portfolio.

Tucows stock has a market cap just above $522 million. On March 19, its stock price closed 3.6% higher. In comparison the S&P 500 index rose by 0.5% and Dow Jones by 0.95% yesterday. Even in the last one-month period, Tucows stock fared better than these two indices, as it declined by just 12%.

An overview of the company’s business segments

Tucows focuses on serving the needs of this network of resellers by providing interfaces, customer service, reseller-oriented technology and agile design and development processes.

Founded in 1993, Tucows aims to provide services that unlock the potential of the internet. Over the years, the company has diversified its portfolio of products and services by leveraging distribution channels and core competencies.

Tucows’ Ting Mobile has managed to disrupt the cellphone industry since 2012 by offering top-class service to customers. It has over 300,000 active subscribers and is one of the highest-rated wireless providers.

In 2015, Ting Internet began offering FTTP (fiber-to-the-premise) services and entered the internet service provider space. Since launch, Ting Internet has introduced gigabit Internet to ten U.S. cities and towns, and is in the process of expanding to additional areas.

During the company’s earnings call, CEO and President Elliott Noss stated, “Our fourth quarter results were once again demonstrative of the consistency in the Tucows business. Continuing strong cash generation from our Domains and Ting Mobile businesses contributed to record cash from operations for the year of $40 million to support investment in our outsized Ting Internet growth opportunity.”

In 2019 Tucows continued to focus on strengthening the quality of its wholesale customer base. This drove gross margins higher in this channel by 15% year-over-year. In its Ting Mobile business, Tucows announced changes to its service provider agreements that will enhance its offerings and also improve the bottom line making long-term growth sustainable in the mobile business.

Tucows invested over $32 million at Ting Internet in its network build to grow the number of passed homes by 60% and expanding customer base by 46%. It also added four new towns and expanded potential serviceable addresses by a considerable 74%.

What next for investors?

In the last five years, Tucows managed to improve earnings at an annual rate of 9.4%. Tucows stock is trading at a forward price to earnings multiple of 26.4 which is extremely attractive considering the company’s long-term earnings growth rate. Its price to sales ratio of 1.55 and price to book ratio of 5.52 are also in line with industry metrics.

It has a strong balance sheet with a cash balance of $20.4 million and a debt balance of just $124 million. With operating cash flows of $40 million, Tucows can easily service debt and interest payments.

The telecom industry is somewhat recession-proof. As several people will self-quarantine, they will consume a lot of data and binge watch streaming content in their free time. This gives an opportunity for Tucows to grow sales in a time of constrained demand, making it a solid defensive pick in a volatile market.